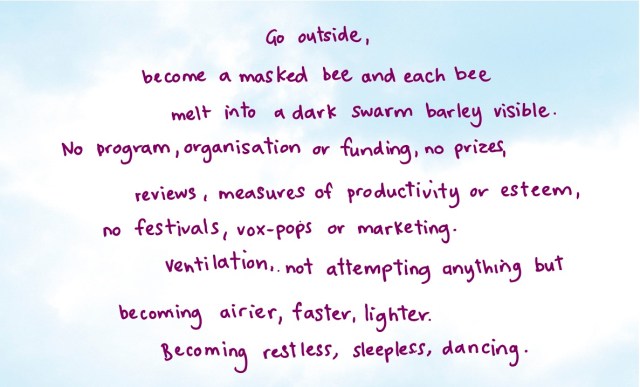 Outside at night: a bare globe throws pale yellow light down a brick wall across the deck of a suburban house, and between the light and the camera shuffles chitty. There’s no music, and backlit s/he is a silhouette that moves, straying in front of the globe occasionally, barely there at all. S/he is night passing captured and contained in the lines of a boy, a girl.

There are video clips like this all over the internet; lone dancers shuffling. The videos are very short – one, two minutes – set in bedrooms, corridors, driveways, kitchens, backyards, on the street. Sometimes it is daylight, sometimes that sickly light that washes public space after dark: think car parks, train platforms. In this dance, the upper body is pretty much still, head still. Dance happening in the feet and legs; arms used as punctuation now and then, snapped into angular hieroglyphs for emphasis, but otherwise loose by the sides. Bodies are clothed: dark colours, baggy pants, long sleeves, hooded tops or caps, not much skin visible, faces in shadow, sometimes the dancer’s head is not even in the shot. Lines of arms and legs black like Texta strokes. If it were handwriting, it would be illegible. Usually the dancers are alone, at least alone of humans. The scene is present. They are elements of it, atmospheres. They are affects and effectors inside nets of space and things. There is no message, no call for participation: ‘dance too! Express yourself! Get fit, lose weight and make friends!’ they are not promoting a better world or an arts festival.

They are performances but they are not for sitting down and attending. They have no story, message or program of edification, no aspiration to get bums on seats, or promote somewhere-something as a cultural precinct or cutting edge incubator of what’s hot. They are for coming-upon, corner of the eye, and for recognising if you’re lucky. If one recognises you 3⁄4 jumps out of the screen at you and your muscles twitch, toes curl or eyes grow hard watching 3⁄4 you might just transform into their style.

You might share this clip, embed it, post or text it, move it on and move on yourself, set up a camera in your own bedroom, garage, driveway or bus stop, upload, become part of the crowd appearing and disappearing across the web through which it has come to you. You might do this fast, a bit high, obsessed, and then forget about it.

These dances and our receiving them are between-states rather than fixed states. They are speed and motion, gliding and gesturing before they mean anything, or perhaps fair to say, what they mean is what they do, and how they move with 3⁄4 or without 3⁄4 you. Barely ‘staged’, in them everything is masked. Against all, I believe on my dark days about rampant individualism, self-involvement, our uncritical embrace of Internet culture, its hyper-sexualisation and dumbness, here are masked dancers effacing the self, sprouting through the fog of the net like star daisies. When I watch, them I feel breeze and affect.

Chitty inhabits a literally idiotic place as air. Accepts its style and adds his/her own twists, kicks, and sticky hand shapes to its traversing. The philosopher Peter Sloterdijk suggests ventilation as a figure that can address the relentless suffocation of the networked world: ‘what is needed is an ‘air-conditioning’ project that can sweep through the gentle all-absorbing hum of the totally managed and domesticated spaces of current social entities, entities which are tangled in a paradox of heightened isolation and heightened connection’.1 How to ventilate against the cold fingered digital reach of institutionalised everything-everywhere? Also its corollary, the ‘soft narcosis of the internet condition’, which is how Geert Lovink describes our indolent surrender to hopelessness in dope and games.2 We can add amateur porn too, I think, the Internet’s opioid-other of productivity.

Chitty breezes: go outside, become a masked bee and each bee melt into a dark swarm barely visible. No program, organisation or funding, no prizes, reviews, measures of productivity or esteem, no festivals, vox- pops or marketing. Ventilation, not attempting anything but becoming airier, faster, lighter. Becoming restless, sleepless, dancing. Of course contributions of this type may appear to be nothing at all. A dumb bee wobbling on top of a rosemary bush, a kid in a hoodie thrashing ‘round on the deck. Neither interesting nor useful. Good! Participating in what’s unmeasurable (aka nothing) becomes important, pitched against what can be measured and named important by morons. Blerk. Avoid it. Ventilate it.

Dance outside at night, and the fewer or more inconsequential the place of other humans in (y)our dancing, the better, because then we are not fixed in idiotic narratives determined by others, then we are free to be affected and affect.

There is (un)work to do. Watch videos on youtube, get ventilated, become chitty, a black bee, make your own meaning 3⁄4 that is what it does 3⁄4 your own corner of the eye dance/ing.