This article addresses the evolution of ethics in dance, proposing that the post modern movement and its influences heralded the birth of an emerging dialogue that catapulted dance into the intellectual domain. For without a dialogue or a framed “mise-en scene”, the ethics are hard to pinpoint. Conversely, part of the strength and weakness of dance lies in its corporeality; for a long time, it had not found a language, and yet, its ongoing presence ensured an existence of peripheral enquiry. The birth of ethics in dance lay in its success in developing a language around its corporeality, and its ongoing concerns continue be gleaned from the ever- evolving dialogue both personally and collectively, from current cultural and political movements.

Post modernism heralded a moment that saw a considerable breakdown in traditional aesthetics. Whilst new terrains continue to inform dance, it is from this springboard that the greatest leap in ethics of the body, space and discourse emerged.

The dissolution of hierarchy from classical dance’s obsession with the proscenium arch, frontal view and architectural linearity occurred with the emergence of modernism in dance. From the emotive expressionism of Graham to the intellectual sophistication of Cunningham, we had the birth of the curve, twist and the tilt. Cunningham’s collaborations with John Cage saw the emergence of sound scape, notions of chance and the introduction of improvisation in dance. These themes acted as a catalyst to establish dance within the artistic intellectual concerns of the time.1 From the 60s onwards, the birth of post modernism in dance brought the avant- garde into the studio.2 Dancers influenced by the social and political context of what was going on began to question the structures and powers that were. In many ways, the parameters in question were extending what counted as legitimate dance. What emerged with post modernism, alongside feminism, was an egalitarian ideal. The pedestrian was given a central space with the emergence of artists such as Trisha Brown.

Those of you who attended Trisha Brown’s ‘Early Works’ in Melbourne International Festival (October 2014) would have been struck by the notion that one was viewing a piece of history. With one task followed by another, there was an appreciation of intellect, form, and a wittiness of pushing a new boundary, including dance, into an intellectual realm. On another level, it was momentarily boring, even tedious. It is painful to admit that sometimes the aesthetics of our ideals are boring. I have had the experience of feeling my way through a piece of choreography that felt so fluid and interesting to me, only to play it back later and see it as rather inane. Perhaps this only goes to highlight an incongruity between my aesthetic and ethical sensibilities. However, it does lead to questions around the choices we make as choreographers and dancers.

Do we have an ethical and aesthetic responsibility to our audience, and if so, where does that lie? Do we need to educate our audience in reading contemporary dance, and how should that occur? It is far easier to look from a distance, and retrospectively muse at the evolution of its ethical concerns. As a dance practitioner, one is preoccupied with negotiating the moment; the class situation, choreographic movement, or tracking the zeitgeist of the dance world. The practice of embodiment as a dancer also ensures that, since subject and object are one and the same, it is very often difficult to perceive oneself. It is rare to have a moment of perception

where one sees in time and space the ethics of one’s decisions, the choices one makes as to how one moves and thinks about the moving body. In effect, as an art form concerned with both aesthetics and a kinaesthetic sense, one has more of a felt sense of engaging with philosophical concerns of ethics whilst dancing. Whereas a choreographer or audience is grappling with a more aesthetic sense of how that looks, and what is being conveyed. The notion of aesthetics and its underlying ethics are a complex melting pot of ideologies, where style, content and context become the syntax through which we come to understand our language.

Obviously, aesthetics are the physical manifestations and outcome of our philosophical foundations. In essence, there are several things that seem paramount to this discussion and which revolve around the question of ethics and dance, namely: why do we dance, with what politics and ideology? How do we work with embodiment, and negotiate the space? Finally and crucially, it revolves around our modes of perception.

In my attempt to grasp the ongoing discourse around aesthetics, ethics and dance, my mind turned to our historicity. It occurred to me that, as a group of dance- makers eager to discover new dialogue, we are so ready to forget our origins of both classical and contemporary dance. In many ways, it may seem perplexing and somewhat passé to have to cast one’s mind back to ballet classes, bad leotards and daggy choreography. Perhaps now in my maturity, and having lived a certain span, I can appreciate the diversity, sophistication and body of knowledge contained within the current status and entirety of contemporary dance. It also enables us to trace, like an aesthetic map, from where we have come. Whilst the classical realm of dance does not entirely intellectually stimulate my artistic sensibility, one should not throw the baby out with the bath water.

There are certain things one has learnt in the ballet studio that make a huge difference to the flow of class. The awareness of one body to another body is something those of us who began with classical, or contemporary dance take for granted. To not merely train the body in a narcissistic sense, but to have awareness of those around you and move harmoniously within that, is something I attribute to the legacy of studio ethics. Whilst not obsessed with the virtuosic potential of classical dance, I have come to appreciate the athleticism, grace and old school skill of classical dancers. I was reminded of when I was training at London Contemporary Dance School. Certain academic members of the faculty asked me with genuine interest and concern how I could subject myself to the physical, political and ethical abuse of classical ballet? How can you subject your body to such a beating? At the time, it wasn’t painful, it was just work, and I found their musings a bit odd, like asking a runner why he runs if it is painful. I had no perspective of the operant hierarchies or ideologies; I was athletic, coordinated and liked what I was doing. What I realise now is that this encounter was perhaps the first movement into an awareness that there were other cultures and critiques surrounding me, ones that as a teenager I was happily oblivious to. 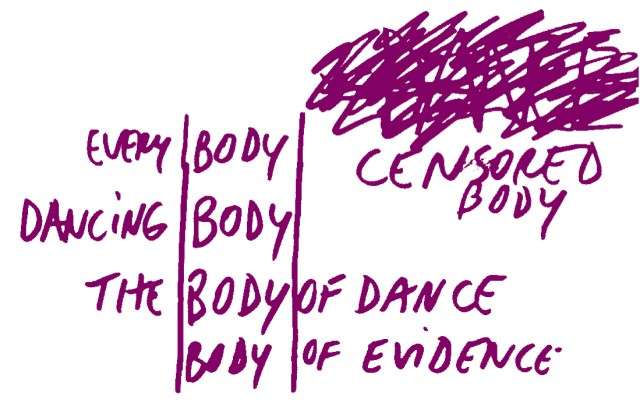 From a training perspective, it’s a question of conditioning; the young body, with a natural ability and good training can do almost anything. However, what choices are available to younger dancers engaged with the body? Are they informed, from a health perspective, intellectually, with training, what the long- term implications of misinformation are? I remember being told as young dancer training that we were “glorified athletes.“ And yet, the “glorified” seemed to be an empty rhetoric of the old ballet world. I can’t help thinking that if we really were glorified, we would have had knowledge of nutrition specifically for dancers, and what was required of our training bodies. There would have been a team of physio-therapists, chiropractors, acupuncturists and body workers, even trainers, to guide dancers through their careers.

It wasn’t until graduating from LCDS that I discovered a kinaesthetic awareness with teachers such as Jill Clarke, Paul Douglas, Scott Clarke, and Russell Maliphant. This was the beginning of a kinaesthetic and aesthetic sensibility, and yet, this was only one part of a multitude of ways in which the young dancer may be helped along the way. These days we can provide training alongside this enormous body of knowledge to foster strength, technique and talent that can be informed with real knowledge that include: kinaesthetic awareness, physiology, nutrition, philosophy, and an artist’s sensibility. In addition, we might like to address the long term goals and career of the dancer in clear and realistic terms so that they may also become adequate fund raisers, teachers, administrators or curators (to name a few), instead of stuck in a strange dichotomy of being highly trained and yet, poorly paid.

I believe the evolution of a language for dance and ongoing dialogue has served to carry it from a marginalised art form, to one that places it (and contrary to my own previously held belief), on par with all current contemporary art forms. We still have a long way to go in terms of how we prepare dancers for the world and I trust that the institutions are taking note. However, we have evolved at break neck speed given that we had no discourse to reflect our milestones. The establishment of ethics in dance via emerging articulations, and its ongoing evolution from the beginnings of post modernism to the present day, are testament to the fact that dance is the most interesting and evolving social and cultural phenomenon that takes into account the multiplicities of corporeality, philosophy, review and practice.

Surviving at The Crossroads: production and performance of a dancer’s body

From stage to living room, art to everyday as a dancer moves, his/her being finds meaning only at the intersections where the social body, the political body and the cultural body meet to produce a body of now.

When I Think I Dance

It is emphatically not the case that dance is the contingent carrier of information or code which can be reconstituted without loss in syntactic language. Rather, dance requires an experiential understanding.