At Home in Travel

Distinguishing between travellers and mere tourists is the great sport of our time, one that even travel anthropology will occasionally participate in. The tourist experience is inauthentic, mass-produced, second-hand, tame. They spoil places and experiences with their very presence. Every self- respected travel writer has raged against them. Jan Morris writes: “I spend half my life travelling, and mass tourism pursues me wherever I go.” Tourists, like hell, are always other people. One is having a meaningful solitary experience of, say, a waterfall or a trattoria, when here they come, with their smartphones, Lonely Planets, bum bags. A decade into GPS for everyone, people mourn that one cannot get lost any longer, escape the civilization.

Early history of post-medieval European travel is tied to exploration. Since most European knowledge of the world was incorrect, a noble 17th-century ‘virtuoso’ could gain a lot in social relevance by simply producing a travel account that relied on experiential knowledge, rather than hearsay. Their travel diaries, illustrations, and accounts were praised as belonging to ‘experimental philosophy’; travel as method. Soon many travel guides carried appended blank, pre-formed questionnaires and tables for recording relevant information still missing from the embryonic statistics collected: the traveller’s attention was directed to the destination’s climate, minerals, soil, population, clothing, livestock and agricultural product.

As the tables filled, one could gradually command less respect simply for observing that not all of Genoa was constructed in marble. The amateur scientists’ fact race was now caricatured as, in the words of Ralph Waldo Emerson, “counting the cats of Zanzibar.” Left without a socially useful purpose, the amateur explorer has had to settle on collecting adventures, aesthetic experiences, sights of beauty; waterfalls and trattorias. No longer a scientist, the traveller became an aesthete: the philosopher, the writer, the artist. The race continued by other means.

In our contemporary understanding, there is hardly any pursuit more 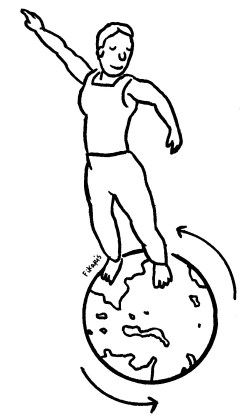 individualistic than good, proper travel. We travel to get out of our community; to see and learn new things; to adopt new faiths, modes of dress, ways of life; to fall exogamously in love; to eat, pray and find ourselves. We travel to make ourselves different from people like us – to become who we really are, in isolation from the distracting influence of our own, boring, bourgeois society.

Our travelling romanticism is heir to 19th-century Romanticism; even more specifically, to the French. We are heirs to Delacroix, Flaubert, Rimbaud, and then Gide – men who went to the exotic Orient to find their soul, stifled in the hopelessly small- minded, bourgeois towns of the French provinces. In 1832, Delacroix set off for Tangiers, to capture the exotic North Africa in his painting. Within three months, he wore local dress and was signing himself off in the letters to his brother as ‘your African’.

Flaubert bore a lifelong hatred for his native Rouen; for the entire France, indeed. Returning from a holiday in Corsica as a schoolboy, he wrote: “I’m disgusted to be back in this damned country where one sees the sun in the sky about as often as a diamond in a pig’s arse. I don’t give a shit for Normandy and la belle France… I think I must have been transplanted by the winds to this land of mud; surely I was born elsewhere.” After finishing law school (terrified the whole time that his life would turn out to be “like everyone else’s: monotonous, sensible, stupid”), his father died, enabling Flaubert to travel to Egypt. Flaubert immediately proceeded to study its language and history, admire its women, camels and temples, and proclaim himself Egyptian at heart.

Here is the precursor to every book penned by every woman who found love and happiness in the hills of Tuscany/islands of Greece/arrondissements of Paris; but also to the desert trips of the Beatniks, the Asian pilgrimages of the hippies, and the European escapes of many a young Australian who just does not feel at home where home is. Travel now was not merely an experience of newness: it was ecstatic, chaotic, intense, soul-probing, enlightening, it was returning home via plunging into total strangeness, it was Rimbaud’s systematic and calculated total deregulation of all senses. Travel now not only inspires art, and develops a boy into an artist – the experience of travel is understood as akin to the experience of art: to travel is to see the world made strange.

Arthur Rimbaud thus became the prophet of every avant- garde and art movement that had pretences to transform lives: admired by Patti Smith and Bob Dylan, quoted by punks and surrealists alike. When I decided to move to Australia at the grand old age of 20, I didn’t think of myself as doing something recklessly stupid; I thought of myself as heroic and self-discovering, and the image of Rimbaud was very much in my mind. When a young Melbourne artist told me, over a dinner on a makeshift Brunswick rooftop: “I need to get away from here. I want to experience weird shit,” whether or not he knew it, Rimbaud was on his mind, too.

Herein lies the paradox: I was finding myself in his country, but he thought he could only find himself in mine. I found it annoying: not so much the idea of cultural exchange, as the implication that he had to go alone, that my hospitality would have been a hindrance to his exploration of a land he needed to perceive as unknown, strange.

In one hilarious chapter in The Art of Travel, Alain de Botton visits Madrid with the intent of exploring its charms. But woe!, whatever he sets his eyes on, his travel guide has already comprehensively mapped. Every church, staircase and window frame is already dated, measured, and its architectural or historical importance assessed. The most beautiful convent in Spain, the guide judges pre-emptively. There is no room for de Botton’s subjective appraisal. Whenever he momentarily lays eyes on something the guide has no entry on, he feels like his aesthetic enjoyment is of some B-league artefact.

Yes, we are haunted by the ghosts of romantic explorers. The more low-costs flights and budget hostels there are, the more of us mingle through tropical temples and island ruins, the harder it is to find that elusive original, ‘authentic’ experience. The frequent traveller easily becomes a disgruntled, ungenerous one, like Jan Morris, wanting to publicise her own discoveries, but not wanting anyone else to feel compelled to experience them for themselves. Itineraries become checklists, and checklists competitions. Listen to travellers’ conversations, and you will find them often rather aggressive (‘Have you done Berlin?’ ‘Ooh, I was there for a month!’ ‘I lived there for ten, in a squat.’ And so on).

But travel is not all heroic. Most of it is very banal. In my childhood, the most common form of travel was shopping in Italy. Entire Yugoslav families crossed the border to buy branded jeans, American records, cheap pasta and canned tomatoes, metres of stacked plastic chairs for the family restaurants, discount shoes. On the way back, one could see, for kilometres on end, rows of cars parked on the road round the corner from the border crossing: people installed car radios, changed into new clothes, and did everything possible to minimise the visible purchases they would have to declare at the customs. Tourism it wasn’t: it was pure, banal, hard- nosed travel.

Most international contact was historically established by people looking for things to buy and sell, including their own work. Nowadays, Filipina maids go to the US; Vietnamese bakers to Australia; Australian artists to Europe. We travel to see bands, art shows, theatre, to flower fairs, for sex. This is the bulk of modern travel: utilitarian, collective, social. Ryszard Kapuciski laments this ‘international riffraff’, but it is precisely the kind unlikely to succumb to aristocratic, de Bottonian anxieties about travelling right. They are too busy. And while we shop, bake bread, teach dance, absorb too many artworks in an afternoon, we are conversing with another country, without pretending to be the lone explorer in a wild, uncharted territory.

Bearing eyewitness became the primary purpose of travel when Northern 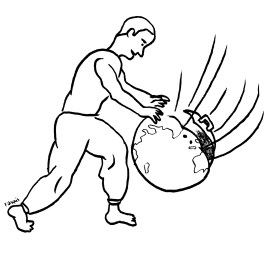 Europeans stopped trusting the Catholics to furnish their own stories. Until then, travel involved not so much eyes, as ears. In the 16th century, European elites travelled to discourse: to learn a language, get educated, to obtain access to foreign courts, converse gracefully with eminent men, to “go a hundred miles out of one’s way to speak with a wise man”, and, not least, speak eloquently upon return. Before travel became colonial stocktaking, it was a discursive, dialogical activity. Instead of chasing waterfalls and trattorias, we could do well to remember that, while we travel, we do not so much romantically escape all societies, as become bridges between many.

Bruce Chatwin, in his beautiful book The Songlines, finally furnished me with a satisfying philosophy of travel. “Could it be”, he wondered, “that our need for distraction, our mania for the new, was, in essence, an instinctive migratory urge akin to that of birds in autumn?” Chatwin suggested that our urge to travel is the body memory of 200,000 years of nomadism. He used the Aboriginal songlines as the model: the pendular movement back and forth, revising known territory, encountering the world in perpetual motion, always different yet familiar, not so much escaping our community as participating in it by moving together.

I like Chatwin’s theory, because it cuts through the elitist anxieties of those who want travel only for themselves, because it justifies our need for distraction and excitement (even of the tourist kind), because it nonetheless honours our need to find things the same on our return, because it socialises travel as a communal activity, and because it seems to describe so well everything that is beautiful about going and returning. It allows that Vietnamese bakers enjoy travel as much as English aristocrats on a Grand Tour. It solves Flaubert’s problem of having to be at home where home is not, by positing that home is not a single place.

When we get bored of a place, it is not because we are cursed. It is because we might be at home only in travel.

Such A Little Thing

The dancer’s body is a paradoxical body. It is the product of a culture and of social determinants, on the one hand; and on the other, it is the producer of new uses for the body. This dimension is little acknowledged by the artists themselves.

Why travel? how does international exchange impact work?