This article is a discussion about a tactics of resistance and its performative effects within social movements and what can be learnt from some of the urban indigenous struggles in Brazil that could animate the debate of dissident strategies to guarantee basic citizenship in cities. The point in question – for indigenous peoples in general, in countries that have suffered colonisation – is access to land. Expropriated, in the case of Brazil, more than 500 years since the period of the Conquest, renamed Great Invasion, native people have been pushed to the margins of the land, mostly in a space called Aldeia, or village, usually far from big cities. This Aldeia in some cases is a formal reserved area for indigenous people and is the result of a long struggle on the part of indigenous movements.

From 2006 to 2013, a group of multiple ethnicities gathered around an abandoned building in Maracanã, in the core of Rio de Janeiro, Brazil. This building, known as the former Indigenous Museum, donated to Brazil in the 19th century by the Duke of Saxe, Princess Leopoldina’s husband, is now called Aldeia Maracanã, Maracanã Village, and is situated less than 200 meters from the infamous Maracanã Stadium, which was the main World Cup stadium in 2014. Until 2013, this building was occupied with the indigenous activities of Tupi Guarani language teaching courses, cultural events mixing indigenous culture with art and other social movements.

The presence of an urban village didn’t cause much fuss until the preparations for the World Cup 2014 began. From 2009 on, the government began a process of eviction from this territory so that it could be used as a parking lot by Oderbrecht, the same construction company responsible for the restoration of the stadium. These preparations started in 2009 and reached their apex one year before the World Cup in Brazil began. 2013 is also marked by huge street manifestations in various cities, where numerous people protested, from right to left-wing movements, putting the political representational system in Brazil against the wall. This period is known as ‘June days’ by some theorists who analyse the contradictory meanings of these manifestations, one year before the re-election of Dilma Rousseff, from the left-wing Labour Party. It is marked by the occupation of streets in Brazil and also by occupying movements similar to what we saw in Tahrir Square or Occupy Wall Street, where people questioned the (non)distribution of wealth. The indigenous movement of Aldeia Maracanã was literally in the middle of it: under pressure of eviction.

On December 17th, 2013, indigenous activist, Urutau Guajajara, stayed for 26 hours resisting the final eviction of Maracanã Village on the top of a tree inside the territory. This act was a result of the invasion by police in Maracanã Village and is known as Occupy Tree. After an initial eviction in March 2013, indigenous people regained their territory due to popular mobilisation in Rio, where the governor had to retreat . But by the end of this same year, there was a new attack in which Urutau was the last indigenous person to exit the territory. He climbed a tree and stayed underneath for 26 hours, the effect of which was to put a hundred policemen and firemen in a state of suspension. Urutau cannot be accused of anything: climbing trees is not a crime; on the contrary, it is an everyday act from non-urban spaces, forest and child play.

Within this context, Urutau’s action of climbing the tree was not deliberately a performance but could be seen in its performative effect since it changed the usual reaction of the police. Remembering a term dance critic and theoretician André Lepecki coined from Rancière’s reflection on the difference between politics and police, Urutau turned choreopolice, a domain of prescribed action into a choreopolitics, a space where politics can emerge.1 What Urutau Guajajara provoked was then a 26-hour state of apprehension and suspension on the part of repressive forces regarding how to proceed, since climbing trees was not envisaged in the code of police repression. Cited in Lepecki, the act of climbing the tree recalls the distinction in Hannah Arendt’s work between “… doing (‘to make’ – which Arendt sees [as] linked to a legislative attitude) and acting (‘to act’) …”

Police actions are circumscribed in Arendt’s sense of doing, in which : “there is never a dead-end for the police”. Again with Rancière: 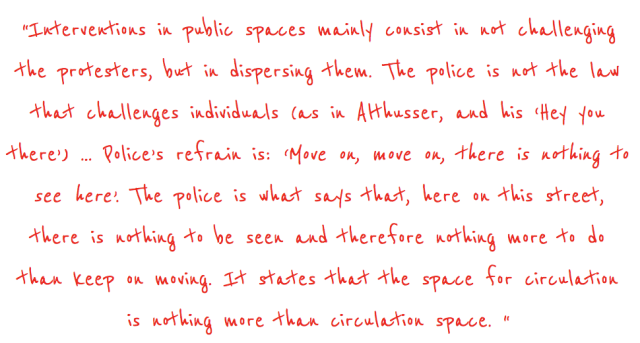 What Urutau did was to “act” in Arendt’s sense, to contradict the choreographed moving on the part of police action – to the extent that he climbs a tree and there he remains. This is the double strength of Occupy Tree. Firstly, to climb and therefore to be out the reach of the police using an act which belongs to a non-urban sphere and secondly, to stay and occupy, expressing once again the strategy of Occupy Wall Street.

It is worth mentioning that the experience of Aldeia Marcanã becomes unique when we consider its context and agents:

That it is an urban village, that is, a collective organisation characteristic of non-urban spaces within the greater urban space, at a moment when for the first time in history, the concentration of people in the cities is greater than in rural areas globally.

Maracanã’s 14,300-square-meter space is strategically, economically and touristically valuable due to its location less than 200 meters from one of the most traditional stadiums in the world, Maracanã, stage of the 2014 World Cup final.

There is a project for the space of an Indigenous Intercultural University managed by Indigenous peoples, breaking with five centuries of state tutelage on the Indigenous people, who are often seen as incapable of managing themselves within Western society.

In the internal dispute between the indigenous components themselves. Where a group called the Curupati, allied themselves with the state government, through the state secretariat of culture, proposing the creation of a state-run Indigenous Reference Center, never built, where the Indians would sell their handicrafts. The creation of a centre of reference along with these lines is opposed by the Aldeia Maracanã Resistance group, Urutau’s group, on the basis that it is an assimilationist project that could be compared to giving mirrors to indigenous people.

The people of this movement have been present in other social movements, such as the demonstrations in favour of teachers during 2013 and against the increase of bus passes promoted by the Movement Passe Livre (RJ) in June and December 2013. Even with the blocked village, there are still rituals outside the village territories. This continuity makes me reflect on the strength of this daily resistance which creates bonds of solidarity between people. More than resistance, this movement is a mode of existence.

Resist is Re-exist in this case. It is possible to perceive an aspect of its politics, now with Rancière: that “it consists in transforming this space of walking, of circulation, into a space where a subject can appear”.3 This apparition, space of appearance, is not limited to the experience of the Occupy Tree, but on the contrary, it seems symptomatic of a change in the times:

“Over the course of this last year [2012], the emergence of a political subject in Cairo, Tunis, Athens, London, Madrid and New York was not due to the old image of demonstration, which already choreographed the protest, but a new occupation image. Occupying the polis, refusing circulation, a stopped act takes political, kinetic, aesthetic aspects, for occupation and permanence demonstrate and reveal how the impetus and the imperative of circulation and agitation are choreographies that police, block and impede another view of life.”4