The title of this edition of the publication resonates deeply with me as I have been very much interested in the idea of how the dancing body/bodies on stage is a form of singularity (the few) that hides the labour of the many bodies that go to create that performance on stage. The works of Performance Studies scholars Victor Turner and Richard Schechner in particular turned my attention to thinking about the rehearsal space and the repetition of that backstage realm as the invisible labour that goes into creating the final product of the performance that audiences then consume. From this perspective, I began looking at the performance of racialised bodies both on and off stage, to examine the binary that creates divides between so called “classical’ and “contemporary’ forms, often seen as the divide between the labour of the many and the labour of the few. These divides speak to larger divides in artistic communities that privilege straight, often white male and female bodies placing their work as solo geniuses who continue to create as if from thin air. While the creativity of racialised bodies is often seen as a repetition of “tradition,” many nameless figures have over time created the product we see, not on mainstream stages in Melbourne, but in suburbs and school halls and community centers. There is little creativity and even less power assigned to these many bodies who are seen often as the proletarian “lumpen masses” of dance. To me, assembling the political is then to assemble the many bodies, the many forms of labour that have gone into creating this binary, to demonstrate how the few and the many is a structured binary that has very real political assemblages of history and contemporary consequences. In this short piece, I will demonstrate through brief examples starting from my own performances as an artist/researcher/scholar and examine how I look at theory as practice and practice as theory to place the dynamics of the few and the many in dialogue.

I have been performing my book Sweating Saris: Indian Dance as Transnational Labour in various cities around the world. As a dancer with many decades of experience and as a ‘recovering academic’, I have found that my writing and theory do not just belong on the page. Keeping it in this realm means narrowing the number of people who can actually engage with my work, which looks at transnational Indian dancers as gendered, racialised labourers, whose work in the cultural sphere has remained invisible. This invisibility is a result of the enduring politics following anti-Asian exclusion laws in the USA and the White Australia Policy in Australia. In the roundtable discussions after the performances of the book, what has been interesting to audiences is the continued relevance of anti-Asian immigration laws as they affect Asians now in Australia, USA, UK and other parts of the world.

Although parts of my work are historical, it is undeniable that anti-immigrant sentiment is ongoing and more relevant than ever. A focus on performance and embodiment often reveals the ambivalence and potential negotiation present in these laws that perhaps an examination of the law as a legal act does not always reveal. For example, it was the 1873 anti-Chinese immigration act that enabled Indians and other Asians to migrate to the United States. Dancers and performers from India were part of the group that escaped anti-Asian labour laws, because performance was not considered a form of labour and performers not thought of as labourers.

They travelled the performance circuit from 1880-1907 until even more stringent laws prevented them from staying on in the US. They performed in theatres, circuses, streets, dime museums, world fairs and at Coney Island, leaving their mark on white women, such as Ruth St. Denis (one of the three mothers of American modern dance), who absorbed their performance practices. When the anti-Asian immigration law went into full-effect in 1924, white women became the sole performers of Indian dance. There was no one to contest this, and the labours of the nachwalis were kinaesthetically appropriated onto white middle-class female bodies. What emerged was one big strand of contemporary Western dance as we know it today.

On this side of the Pacific, The White Australia Policy (The Immigration Restriction Act) meant that very “few” people from Asia could enter the country, let alone performers from Asia. This meant that singular white women – such as Anna Pavlova who had been working with Indian dancers such as Uday Shankar – brought her “Indian themed” performances to Australia even though Uday Shankar could not join her. Louise Lightfoot (an Australian dance student of Pavlova’s) was also one of the primary forces behind representations of Indian art forms in Australia. That is, until the mid 1950s, when Lightfoot brought Shivaram (an Indian Kathakali performer) to tour Australia alongside her. Lightfoot and Shivaram taught many young white men and women aspects of Indian dance forms, some of their students including pre-eminent contemporary dancers like Ruth Bergner and Margaret Lasica.

It wasn’t until the abolition of the White Australia Policy in 1973 that we began seeing actual Asian performers migrate and settle in Australia. Here, they created some of the most incredible and political work with funding from the Australia Council and other bodies. This includes the prolific work of Dr. Chandrabhanu (OAM), the artistic director of the Bharatam Dance Company, Tara Rajakumar (OAM), the artistic director of Natya Sudha Dance Company, Padma Menon the artistic director of Padma Menon Dance Company, and many others. Their companies performed on mainstream stages such as the Arts Center in Melbourne for decades. However, since the Howard Government’s defunding of the multicultural clause in early 2000, we have seen silenced around contemporary South Asian performance practices in Australia on mainstream stages. 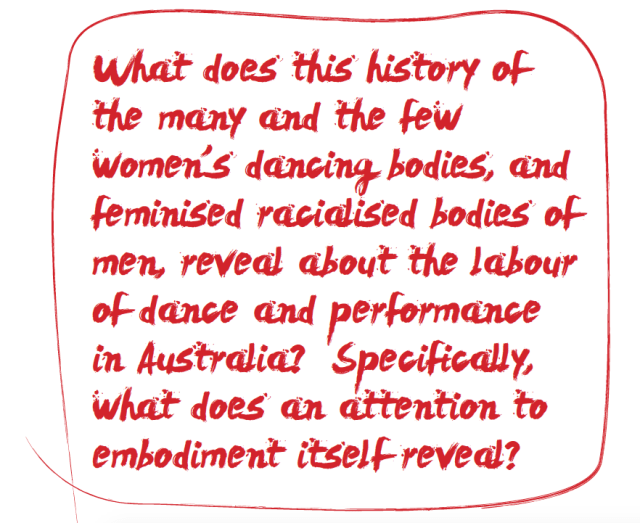 In my multidisciplinary performances using visual images, classical Indian music (in the form of the female voice) performed in collaboration with Melbourne based carnatic musician Uthra Vijay and with California based dancer and choreographer Ramya Harishankar, I use spoken word, theory and movement to ask my audience to participate and help make chappatis (Indian bread). I ask them to read the recipe out loud, then have a few volunteers come and get their hands dirty. As they make chappatis, I show images of a 1906 performance by Ruth St. Denis as Radha, surrounded by various South Asian men in New York. I perform the story of how many of these men spent long hours with St. Denis cooking and cleaning and creating dances with her (as she admits in her autobiography and diaries). One of these men, Mohammed Ismail, ultimately sued her in 1909 for $1000 USD for stealing his choreography. He lost his case in the Supreme Court because the judge deemed that a cook like Ismail could not know anything about dance. After all, this was “a native’s avaricious attempt to disgrace Miss Ruth.”

By the time the audience members have finished making their chappati, they are asked to confront the irony and juxtaposition of chappati making with an intersectional analysis of race, gender and class as it relates to performance. An innocuous object that can be consumed, ingested and excreted emerges in the intersectional encounter between the performer and the audience. This questions the borders of bodies, across time and space, through the performative event and the act.

I conclude by asking whose bodies are we seeing today in mainstream spaces? Whose aesthetics are dominant? Whose history occludes and makes invisible the labour of immigration and the absence of certain racialised borders that helped consolidate modern and contemporary dance practices today? How can those in power share the spaces and resources with the many in the margins? What can an attention to the historical assembly of all these flows, stoppages, and movement invite us to consider as we move forward.