One of the most straightforward responses to the issue of the arts, its relation to the marketplace and public funding was an initiative of the Culture Secretary of Rio de Janeiro who, in 2012, split the arts budget down the middle. One half was apportioned to the commercial sector as ‘investment’, the other to the not-for-profit sector as ‘a grant’ (without any requirements to justify its receipt). This approach seemed to balance the contesting arguments around arts funding – one that recognises art as a public good and the other that frames it as a commodity in the cultural sector of the economy. It seemed a mature solution to two irreconcilable trajectories.

Around the same time, however, Brazil’s Federal Ministry of Culture set up a Secretariat of Creative Economy that, although maintaining the principle of the centrality of the arts, applied it in the loosest of ways, ‘since creativity is not the exclusive privilege of the artists.’ Under cover of asserting the human right of all citizens to be creative, this view became widely distributed in the form of a neo-liberal strategy that disenfranchises artists from the social, cultural and financial currency, which underpins the notion of art as a public good. It has been adopted as much by nominal progressive governments as conservative ones. Its consequence is what Nobel Prize-winning author Maria Llosa Vargas refers to as ‘the reduction of value to price’.

An example closer to home is the current Victorian Government which, in late 2014, dissolved the Ministry for the Arts and – bypassing the logical establishment of a Ministry for Culture – established a Ministry for Creative Industries which sounds like the one-hit policy wonder it is – imitating New Labor’s discredited UK attempt to substitute art for entertainment. The ‘creative industries ideology’ talks to the arts as an object for monetisation. Any discussion of the arts within the creative industries is rendered in an investment paradigm as opposed to a grants paradigm. Inevitably, this has major implications for the arts, the artist, the value of her work, the way she practises and how she behaves as a social agent.

The responsibility for this circumstance must be shared and noted. Over the last decade, the language of the ‘arts market’ has crept into the Australian vernacular along with the conclusion that, in order to justify itself, the arts needed a market like any other commodity and so was turned into just that. Its devaluation as a ‘thing’ with no value other than price was aided and abetted by the emerging managerial class of the arts industry, the control of which was, in part, abnegated by artists. The perversity of this condition is contained in a question I have asked in a number of forums: 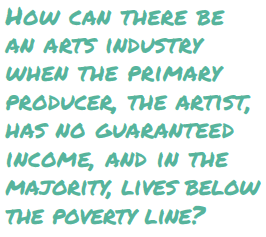 The growth of the Australian arts industry is directly proportional to the diminution of the artist, whose labor has been exploited in a persistent and unconsidered manner. Further, the top end failed even more miserably to defend itself when, in 2015, the Federal Government attempted to disinter the Australia Council by ripping out $70+ million from its budget. The agency rolled over without a whimper along with the major performing arts organisations whose self-interest outshone any moral imperative. Today, the Australia Council is little more than an Arts Ministry bank account used to bestow its largesse on the major organisations, which are collapsing under outdated business models. The Government, through the new Catalyst program, wants control of the kind of art produced, drawing tighter the noose of prescription (if not propaganda) around the artist’s neck.

I believe we have reached Year Zero, a point where cultural policy and infrastructure no longer serves the interests of the arts, the artists or society. It’s been toxic for years. Last year’s incursion simply brought things to a head. The economics of art-making and any notion of a sustainable working life for an artist are dependent upon non-economic approaches.

The way forward requires a blank canvas on which the artist’s work is predicated by a view that intertwines the philosophical, the social and the civic with the artistic. This formulation is about wresting the momentum from the current debilitating economic forces the Australia artist currently faces. Here are practice strategies artists might consider:

Re-action That is, to react against the dominant hegemony and, by so doing, the artist can ‘re-act’ or ‘act anew’. In this frame, the artist makes work that directly provokes the political culture, and that makes no sense to the arts agency and no money for the arts industry. Art re-defines itself in opposition to the status quo.

Participation A trend in contemporary practice, participatory art is widely perceived as an antidote to spectacle and entertainment, an embrace of intimacy and a valorisation of community. Its rise is due to the profound disconnect between civil society and political culture caused by neo-liberalism, which requires the disabling of democracy as it represents the biggest obstacle to profit-maximization.

When democracy functions less well, our participation reflex looks elsewhere for exercise. Live performance is a logical choice because it is immaterial and so receptive to multiple and complementary modalities.

However, by satisfying this reflex, are we helping to maintain the illusion that democracy is not being disabled? Are participatory arts the Kool-Aid of Western democracy masking its deliberate corruption or a pathway to civic-based solutions?

“What is needed in the current situation is a widening of the field of artistic intervention, with artists working in a multiplicity of social spaces outside traditional institutions in order to oppose the program of the total social mobilization of capitalism.” [1]

Artists need to intervene in non-arts environments. We need to see our artistic practice as a dramaturgical tool for civil society. Let’s be bold. We need to develop not only an artistic dramaturgy and a cultural dramaturgy but a progressive, social dramaturgy. We need to operate cross-sectorally and think transversally. We can no longer enjoy the luxury of being the antagonist. We need to drive the narrative, be a protagonist.

Complicity The meaning of an artwork is not found in its monetary value. It is found in its complex agency in the professional context in which it is made, and in the social and political contexts that govern its presentation. This agency is determined by the artist’s complicity within these contexts. These concentric circles of action and connection are central to our dramaturgy as artist-citizens as is our understanding that the meaning of an artwork is not simply in and of itself – its meanings are multiple. An artist’s responsibility is determined as much by the generation of meaning as an understanding of her complicity in its iteration.

Unless artists define themselves by making work without consideration to the criteria of government, unless they seize control of the language in which policy is forged, unless they write the story of culture in which they are leading characters, unless they understand deeply the complicity of their participation in the various contexts in which they work, then our labor, our artworks, our role and agency in society will diminish – and economic modes of production will be an end without a means. Working for nothing. Zero.